Suspect Pleads Not Guilty In Murder Of Broomfield Auto Technician

Lawrence Crouch, the man suspected of murdering a Broomfield, Colorado auto repair shop employee named Mary McGrath in October, pleaded not guilty to charges of murder in the first degree. Despite his plea, the arrest affidavit says that he previously admitted to law enforcement that he had, in fact, killed the 56-year-old employee of East of Sweden Saab car repair shop.

In fact, investigators say that not only did Crouch admit to murdering McGrath, but he was a deeply troubled individual who had also planned to murder a woman at the extended-stay hotel where he was living. He had also apparently planned to detonate an improvised explosive device in the lobby and burn the hotel to the ground. It’s not clear what predicated these plans. Media reports of the incident did not include any fight or incident between Mr. Crouch and the woman at the hotel.

Crouch faces charges of murder, attempted murder, attempted arson and possession of explosives. The not guilty plea that Crouch entered at his arraignment surprised even his friends who had earlier heard testimony presented of interviews between Crouch and prosecuting attorney Joe Pacyga, where Crouch admitted to killing McGrath in what he said was “stress relief”. He also mentioned that he wanted to kill McGrath because she took advantage of Bob Wisdom, the owner of the East of Sweden car repair shop. McGrath, Wisdom and Crouch had all previously lived together.

It appears that Crouch was simply a very confused and disturbed individual and police have yet to uncover any evidence that points to a real motive or what the actions were of McGrath that would have caused Crouch to fatally shoot her.

If this wasn’t creepy enough, Crouch told investigators that he had been planning to kill McGrath for almost a year before he actually carried out the act. He said that he finally decided to do it because he had run out of money and had nothing left to lose. He had also developed a molotov cocktail out of gin and soap that he planned to use, but thankfully never got to. Regardless, this tragedy is another in a list of Colorado shootings that is becoming far too long. 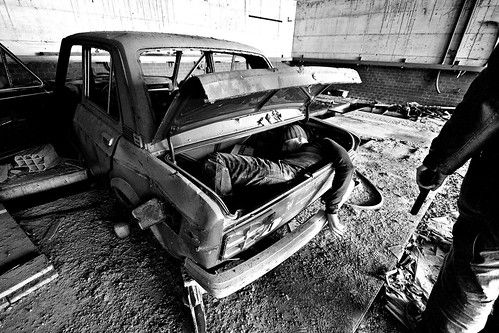